The word augmented reality is all about the combination of real life and virtual life where it mixes the real world with the environment within the app. Interactive digital features like instant feedback, stunning visual covers or sensory projections are blended into the real world. Thus AR should not be considered as only Smartphone’s fun part but rather used in different serious ways right from medicine to businesses. For e.g: Goggles sky map is one of AR well-known application which discloses information about constellations and planets whenever you place your camera’s direction towards the sky. Another example is all about the US army which uses AR app to create digitally improved training mission for their soldiers.

Augmented reality is one of the well-known technology which was originating in the 1970s has been used in CAD programmes for aircraft assembly, navigation, military, medical procedures.AR is changing the complete business scenario where consumers can now feel about their products and services well before purchasing them. Even retailers are nowadays going more eager to use this latest technology for the better shopping experience. For e.g. Pokémon GO is considered a highly successful app. Another one is GAP’S augmented reality application which allows customers to try clothes on themselves right from their homes. An only important element which is used in augmented reality is the use of smartphones where virtual features are superimposed onto the actual real surroundings. Because of this technology, the live environment gets digitally augmented by the use of images, sounds, and videos. Many biggies like Google, Oculus, and Microsoft are making use of this reality with the help of Google Glass, Oculus Rift, and Hololens. Thus main aim of AR is to create such an environment where users are unable to segregate between the real and virtual world and are used in many areas like entertainment, robotics, military training, engineering design, and many such other industries.

Application of AR technology starts with the mobile application where smartphone identifies and interprets white and black barcode image named as a marker. After analyzing marker, the virtual image gets superimposed on the mobile phone screen which is tied to the position of the camera. Then the camera required to read distances and angles of the marker from the mobile which generate the illusion of the virtual elements in the real surroundings.AR makes it possible for users to cooperate with the internet world and position users to communicate with 3-dimensional spaces. Thus augmented reality is used everywhere and impacting our lives right from businesses, sports, entrainment, and travel to the education field. For e.g.: Imagine if you are going to jungle safari and can easily fetch important information of whatever you will see through augmented reality. Because of its bold user experience and cost saving factor, AR is considered to be the most classy technology which enables users to consume products and services before actually purchasing it.

At C-Design we always make sure to understand client’s requirements properly and then offer the best possible competitive augmented reality model by using the latest tools and technologies. Our clients always have crystal clear communication with us and proper synchronisation with them at every developmental stage. Our proficient designers are well qualified and proficient in their fields and possess the necessary tools & techniques to design live direct or indirect view of a physical, real-world environment whose elements are augmented by system-generated sensors 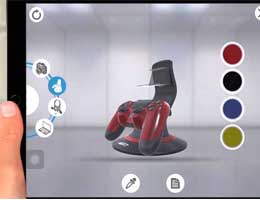