Even though Post-production is considered as the most unacknowledged part of 3D visualisation but still it plays a major role in providing photo realism in architectural renderings. That’s why post production is always considered a significant part of good render which used to improve quality and visualisation. Being an end stage of any animation making process, it involves rendering or exporting animation frames and editing animation pieces along with video software. The final editing process also involves including soundtrack or sound effects into it. In order to create photo realistic images, the following points should be taken care of:-

Overuse of brightness-Lighting plays the most important role in architectural rendering as it helps viewers to see anything kept on the renders. Also, it directly guides as communication tools for them and direct users to look around freely. However, over lighting will not be useful as one can never see exact details through it. Another important tool known as vignette helps in drawings users’ attention towards its centre and thereby faintly darkening photograph edges.

No use of elements –If your space has no elements in it then your 3D image won’t look rational and becomes quite unattractive for clients to think about purchasing that property. Also, a 3D image with empty space makes clients quite tough to believe that they are in this space. So any character or elements in a 3D image gives ‘wow’ look to our clients and people feel much easy to picture their own stuff in such spaces.

Many colors and wide lenses-It’s advisable not to use many colors in your 3D image which makes them too vague and sterile. Also, similarly important is the use of proper lenses which narrows down over zooming so that it gives clients equal freedom to look at the entire scene or building or a small section of it. Additionally use of different components like lighting, color, angle, composition, choice of lens for films, texture helps in creating a big deviation in qualitative renderings and that’s why should be used in an utmost way in it.

Absence of nature-Those renders having outside scenes like lots of bushes trees or small nature details creates comfortable feelings in the mind of our clients. At C-Design we have a team of brilliant developers, architects, marketers who understand minute details of photography, proper adjustment of camera angles and camera positioning so as to create outstanding and faultless photo realistic 3D images with affordable pricing and within the stipulated time frame. We understand the client’s expectations and goals and then convey them through well planned and effective story after blending with a marketing strategy which delivers brands story line through it. 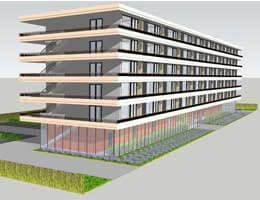